The Regulators of Lincoln County were formed in 1878 after the murder of rancher John Henry Tunstall by the corrupt Sheriff's posse. When the law refused to go after Tunstall's murderers, his ranch hands were deputized by the Justice of the Peace, forming a posse known as the Regulators. Thus began the Lincoln County War. They were given warrants to serve on the Sheriff's men, but as it turns out, they mostly served bullets.

We manufacture our Old West replica badges out of brass and steel. They are double-stamped then silver plated. Next, each badge is individually hand finished for a unique antique look.

FREE with every badge: an old-fashioned style Kraft box with a story about the badge inside the lid. 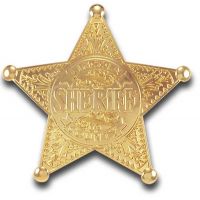 Lincoln County Sheriff Star Gold Badge story inside the box:This badge was specifically made for pre.. 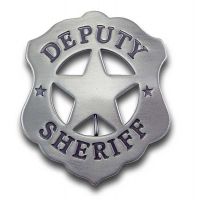 Deputy Sheriff Badge story inside the box:This type of badge was worn by two deputies, Bob Olinger a.. 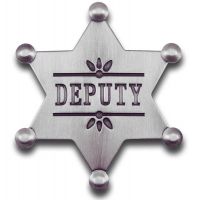